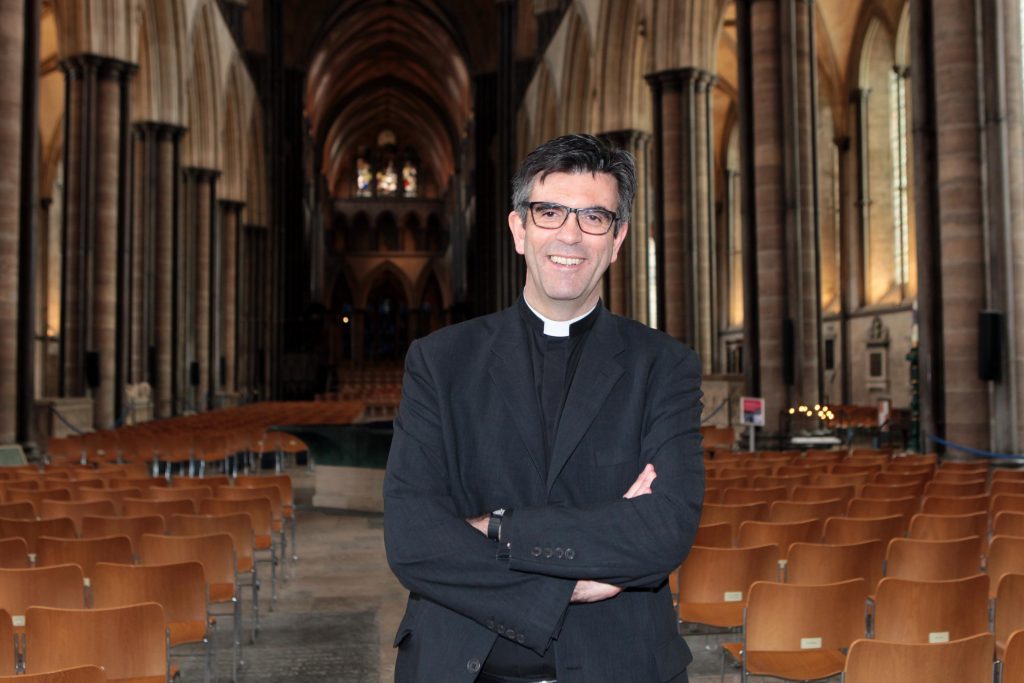 Nicholas Papadopulos was installed as the 81st Dean of Salisbury on Sunday 9 September 2018.

Prior to his appointment he served for five years as Canon Treasurer of Canterbury Cathedral, where he led the Canterbury Journey project to repair and refurbish large parts of the historic fabric and to improve the facilities for visitors. He also oversaw the Diocesan training programme for newly ordained clergy. He moved to Canterbury from London in 2013, where he spent six years as the Vicar of St Peter’s Eaton Square, a large parish in the heart of Westminster with a fascinatingly diverse community and ministry.

He knows Salisbury well, having served Bishop David Stancliffe as his Senior Chaplain between 2002 and 2007.

Nicholas is married to Heather. They met when they both worked as barristers specialising in criminal law, and they have two grown-up children. They share the Deanery with two cats and two tortoises.

During the lockdown Nicholas has learned to garden (very amateurishly) and to run (short) distances; he enjoys reading novels, poetry, history and biography, listening to music and cooking from whatever cookbook he was given at Christmas.

Bishop Lang was born on 15 April 1950 in Cowes on the Isle of Wight. Both his parents came from Ireland. His father was a doctor in Cowes having previously worked as a GP in Birmingham. He went to Allen Hall, St Edmund’s College, Ware to train for the priesthood in September 1968 and while he was there he also went to Royal Holloway College University of London, where he gained a BA in history. He was ordained a priest on 7 June 1975 by Bishop Derek Worlock at St John’s Cathedral, Portsmouth. He was then appointed  as an Assistant Priest at the Cathedral and Chaplain to St Edmund’s Comprehensive School in Portsmouth.

Four years after ordination he was appointed Secretary to Bishop Emery and  Chancellor. During this time he also worked on the Diocesan Youth Commission,  which he later chaired. For a number of years he went as Chaplain with the  Portsmouth Group to Lourdes at Easter. In 1983 he was appointed to the Religious Education Council as Adult Religious Education Advisor, a position he held until 1990. While doing this work he was also Parish Priest of Our Lady, Queen of Apostles, Bishop’s Waltham, for four years and then Parish Priest at Sacred Heart, Bournemouth.

Bishop Lang’s Episcopal Ordination was on 28 March 2001 in Clifton Cathedral,  Bristol. Within the Bishops’ Conference of England and Wales Bishop Lang is  part of the Department for Dialogue and Unity. He chairs the committee for  Theology Faith and Culture. He is the Co-Chair of the Anglican-Roman Catholic  Committee (ARC) and also the Co-Chair for the Committee for Roman Catholic and  United Reformed Church dialogue in England and Wales. He is the Bishop responsible for environmental issues. Bishop Lang was elected as Moderator of  the next Churches Together in England Forum to be held in 2009. He is a member of the Mixed Commission of Bishops and Major Religious Superiors and is a  trustee of the Pontifical Missionary Societies.